Prevent the spread of Strangles

Reasons to Call the Vet

If you find out that a horse on your farm has strangles, it is essential to keep it quarantined from the other horses to prevent the spread of Strangles.  This is part two of “My Horse has Strangles.”  I want to thank an anonymous person for their first-hand experience with strangles and all of the photos.  This is their story.

Example 2:  Recently, a farm of forty-two horses came down with a strangles outbreak.  Thirty-four horses unofficially came down with strangles.  Six of the horses developed abscesses, and one horse had an autoimmune response.  I say unofficially as we only tested the first two with symptoms and quarantined any others that came down with any symptoms.  From our research, the bacteria can survive outside the host for up to 34 days in cold, wet, and humid conditions.  We have been closed from any horses entering or leaving for roughly three months, and that seems pretty standard from other equine professionals I spoke with.

Most of the horses had a few days of copious amounts of snot, but they would have a thin dribble for the most part.  It would often look like they didn’t have any or minimal snot or symptoms until after they ate.  Then they usually had much more significant amounts start flowing.  The buckskin is what we generally saw during the day or before eating with the occasional flow. 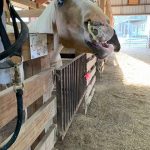 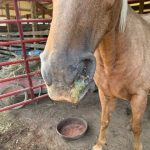 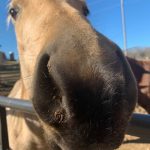 We did clean most water troughs and buckets almost daily as drinking also increased snot flow, and it would quickly discolor the water and leave large mucus clumps floating or sitting at the base of the trough. 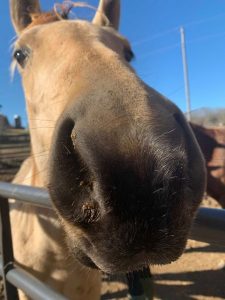 I did not get any pictures of this access to its fullest.  This was after it drained on its own.  The dates go Nov 13, Nov 15, Nov 20, Nov 27. It burst on the 13th, scab began falling off on the 15, and after cleaning, looked like ground beef.  We did end up cutting the rest of the scab off to encourage drainage and prevent him from ripping it off.  Nov 20, cleaning every day is the second to last photo.  Nov 27 is the last photo I have of this special access. 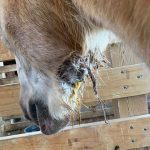 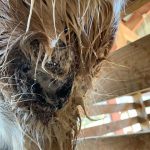 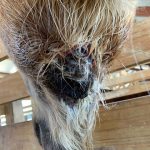 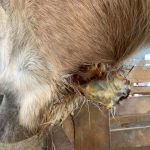 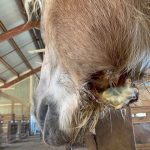 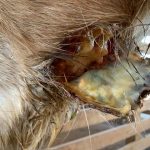 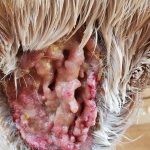 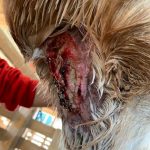 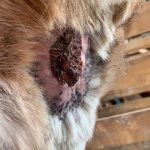 How did we get it?

We do not know what horse brought it onto our property or if it was a person.  Our facility sees about 200 people a week.  We do lessons, trail rides, and some showing though none of our horses had been off the property in about six months.  We had just brought in 3 new horses, and they stayed in their quarantine area for about 20 days with no symptoms.  They were turned out with the other horses, who all run together on 60+ acres of pasture.

Shortly after, two of our regular horses developed rapid symptoms.  Both had been on the property for more than two years.  The first one we thought was choking because she showed no signs the previous day and was blowing snot about halfway through her breakfast, making gurgling noises, trying to clear her throat, and refusing to finish eating.  These were pretty on par with the symptoms of other horses we had who had choked.  I took her to the vet; there was nothing to clear.

While I was at the vet with that horse, a second one came in acting lethargic.  She was kept in for observation and started bubbling and foaming at the mouth.  Hauled her to the vet as well.  By the time she got there, she had some snot beginning to come from her nose.  The first horse did develop a small abscess; the second did not. 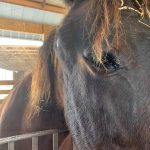 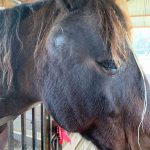 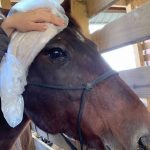 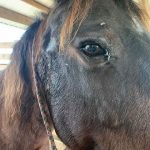 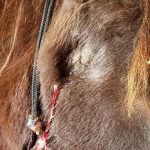 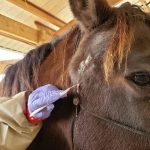 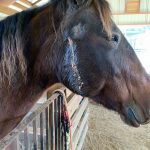 Of the three new horses we brought in, only one contracted strangles, and that was about two weeks after the first horse showed symptoms.

Each case of Strangles is unique, and each treatment plan is different.  Contact your vet to help you with your horse.  If you choose to have detailed documentation of your experience and want to share it, please let me know, and I will add it to Find My Horses for others to learn from and prevent the spread of Strangles.

Tags: How to prevent the spread of Strangles, Strangles